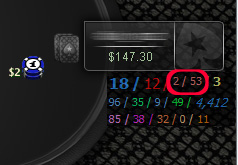 Tradition requires that we mention the classic Aggression Factor /AF/ calculated as (Bet + Raise) / Call, checking or folding with no effect.

The drawback of this indicator is that due to its formula it can’t differentiate between a hyper-aggressive player raising any two cards and a fit-or-fold player throwing away everything but the pure nuts. Basically, all a high AF tells you is that the player doesn’t like to call.

I myself don’t rely much on this indicator, but it’s a part of the so called Holy Trinity of Poker HUD stats (VPIP, PFR, AF) so you have to know what it does.

In order to see a nuanced picture, you need different indicator – and which one you’ll use depends on your poker HUD program of choice.

Aggression percentage /Agg Pct/ is used in Holdem Manager and represents the frequency a player takes an aggressive action on a given street. So if I bet the flop but check the turn and river I would have 33% Agg Pct because I made 1 out of 3 aggressive actions.

There is a slight difference in the way Agg Pct and AFq are calculated, as Agg Pct sees checking as passive and AFq as neutral. Some players say that counting checks as neutral is OK as the player could intend to check-raise, but I personally prefer the Holdem Manager Agg Pct statistic – it’s more straight-forward. The probability of a Check-Raise can (and should) be analyzed using the separate Check-Raise statistic, but more on that later on.

Both Agg Pct and AFq start to become useful for the different streets after about 300 hands. Knowing these stats allows you to clearly identify overly passive and aggressive players. As far as ranges go, an Agg Pct less than 30% is extremely passive and more than 60% extremely aggressive. AFq range is similar – too passive when less than 35% and too aggressive over 65%. The slight difference occurs because checks are neutral in AFq and not counted as passive. These ranges depend heavily on the limit and the type of table – lower limits usually have more timid players compared to the higher limits and shorter tables see more aggression than full ring tables.

As always, remember to look at the stats for the individual streets – often players are very aggressive on the flop but proceed differently on the turn and the river.

FR (full ring) table, you are in middle position with a pair of 6s. A player in EP (early position) limps in, you limp in, and the BB (big blind) checks. Flop comes 2 5 9 rainbow (of different suits). The big blind bets half of the pot and the early position player folds. Now what? Well, let’s look at his stats (we’ll assume a decent hand sample is available).

The opponent is definitely a loose-aggressive player (LAG). He obviously plays a lot of trash hands, so his flop aggression percentage of 64 is borderline crazy. He didn’t raise pre-flop, so a big overpair is unlikely; probably he caught something on the flop. Against a passive player we can consider folding here, but this particular opponent can bet just as easily second or third pair, or simply two overcards. You should at least call, but a better option may be to look at the villain’s Fold to F Raise percentage and if it’s high enough, raise him to force a fold.

A weak-tight player bets two opponents out of position – a definite sign of a big hand – at least top pair with decent kicker. He probably would have slow-played a set or two pairs, but a nine in his hand would explain the bet as protection from overcards on the turn. Anyway, under the circumstances we have no more business in the hand and should fold.