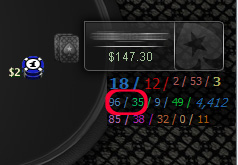 Continuation Bet – continuation betting and folding to it. The percentage of times when the preflop raiser bets again later in the hand is measured by the CB stat in Holdem Manager and CBet stat in Poker Tracker. This HUD statistic is very important for the simple reason that the particular situation occurs so often. The power of this indicator is greatest at the flop with only two or three players involved in the hand.

In order to understand why, think about this: most flops miss most hands. Two different hole cards hit anything only about 1/3rd of the time. Very often no one has a solid hand or a draw and winning becomes a matter of who will make the first stab at the pot. Most players also tend to check to previously shown aggression, so the preflop raiser is usually set up to try to steal.

Then again some players (especially people with background in limit Holdem poker) overdo it and C-Bet almost every pot. Such blind aggression is unnecessary even against weak opponents – they won’t notice its predictability, but many of them will refuse to fold marginal hands and will call you down and beat you at the river. Good players will pick up on these tendencies and capitalize, so in order to be profitable you need to carefully pick the C-Bet opportunities and always consider the nature of the player who C-Bets you.

Full ring table; a player in MP raises 3xBB and you call with a pair of 8s in late position; the others fold. The flop comes 4 9 Q rainbow and your opponent bets 2/3rd of the pot. Now what? Maybe he missed and is doing a standard continuation bet with nothing but air, or he has a made hand that beats you. How can we know? Well, to find out how he typically plays in similar situations, we look at the Flop CB percentage.

A tight-aggressive player otherwise, this opponent has a hidden flaw in his game – he has a routine of making continuation bets on the flop and if he’s bluffing, gives up on the turn and river. Your hand here is not strong enough to slow-play and you need to know right now where you stand – so a good raise of about 2/3rd the new pot is OK. To help you with this decision Holdem Manager has the extremely useful statistic Fold Flop CB Vs Raise – it will tell you exactly how often the opponent folds when his flop C-Bet meets resistance.

A tight player, a little passive. But when he C-Bets the flop, beware – more often than not he has it. This situation is totally different than the first one – we have third pair and most probably are way behind in the hand. Fold.

Full ring table; we are in MP and hold AQs. It is folded to us and we make a standard raise of 3xBB and get only one caller in LP. Flop comes 4 8 K. What do we do?

First, it’s a relatively good flop to C-bet – only one high card and no open-ended straight draws possible. But we’d like to be sure, so we look at the opponent’s Fold to Flop CB.

This guy is a calling station. Don’t try to bluff him – you’ll throw your money away. If we had a hand we’d value bet here, but right now it’s futile. Check and hope for a free showdown.