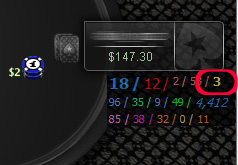 Call Open (aka CCPF) – a cold call preflop is when a player calls a preflop raise when he doesn’t have any money in the pot yet, including blinds.

Two very important fundamental concepts in Texas Hold’em poker are: 1) you need a stronger hand to call than you need to raise with, and 2) the majority of hands that are good enough to call with, are also good enough to raise. As a result good poker players rarely just call pre-flop.

The Call Open HUD stat shows you the range of probable holdings of a player who cold called and in addition reveals the fish at the table.

When you calculate the cold call range of a player also take away the top holdings using his 3-Bet percentage to increase accuracy.

As for typical cold call ranges, for 6-max tables anything over 10 is too loose, no matter of the playing style. For full ring tables the number goes down to 5 and many winning players cold call under 2% of the time. On the low and micro limits you will often see opponents who cold call 40-50% – think of these online poker players as your donors and always try to take them on, isolate and bust them.

Full ring table, we are in MP with AQo. It’s folded to us and we raise 3xBB. A player in LP calls and the blinds fold. Flop comes 2 4 A rainbow. We make a C-Bet of half the pot and the opponent calls. The turn is a 9. We bet again half of the pot and are called. On the river comes another 2, eliminating the possibility of a flush or straight. The pot is now 30xBB. Should we bet or check? Let’s see the stats.

A loose-passive player – a delicious combination. Opponents with Call Open stat of 22% play any suited ace and most unsuited ones, so he’s probably holding a weaker ace and is hoping for a miracle. His 3-Bet preflop range of 3% (JJ+, AK) suggests that he’s not currently holding AK and his passive play so far probably means that he doesn’t have a set. We should value bet this opponent again on the river – most often than not he would make a crying call with a weaker hand.

A TAG player smooth calls us twice, which should sound the alarm in our head. What could this opponent have now? With a Raise 3-bet of 4,5% he would probably re-raise AK, AQs and 99 preflop. There were no draws in the hand. 44 is not a strong enough hand to play according to his Call Open range. Maybe he has AQo and wanted to see the river cheaply, or he slow-played AA.

Anyway we have no interest to bet here – if he’s got us beat he’ll raise and if he has the AQ we’ll split. Checking here may even induce a desperate bluff from his part if he has a AJs or was slow-playing KK all along. If he bets a reasonable amount after our check we’ll probably have to look him up.