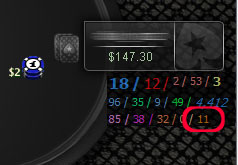 Check-Raise (CR) – the percentage of times a player check-raised when he had the opportunity.

This poker HUD stat helps you to figure out if a player who check-raised you has a monster hand or that’s just part of his routine online poker play. The indicator is also useful when you decide whether to bluff in position – if a pre-flop raiser who likes to check-raise checks a dry flop, be careful.

For accurate reads on check-raises you need a large sample of hands – I begin to put some trust into this stat after at least 1000 hands.

Average CR stats are in the 4-8% range, so you know that an online poker player with 2% CR has a real hand and another player with a CR of 15 often has air.

Full ring table, we are in LP with 89s. A player in MP raises the minimum of 2xBB, we call and so does the BB. The flop comes 7 6 A of different suits. The big blind and the preflop raiser both check. Should we check or bet? Let’s look at the stats.

We have an open-ended straight draw, which we should usually bet when in position; however there is a tricky player who can push us out of our draw if we give him the opportunity. There is a lone ace on the flop and the preflop raiser, who likes to C-Bet, knows two things: 1. that we know it is likely that he raised a hand with an ace in it, and 2. we probably would throw away preflop the hands with weak aces up to AJ and would have re-raised him with AK. Knowing all this the tricky opponent decided to check the relatively dry flop? Why?

Well, most probably he is not afraid of draws and doesn’t want to scare us away by betting his good ace. He wants to do his favorite play: check-raise.

So let’s outsmart him and take the free card.

OK, so now the preflop raiser is a solid player who doesn’t like to play it fancy. If he had the ace he would probably had bet to avoid giving free cards. We should stick in a good bet of 2/3 the pot and be happy if the opponents fold. If one or both of them call we still can hit our draw on the turn, plus even if we don’t hit it they will likely check to us and give us the chance to draw the river for free.