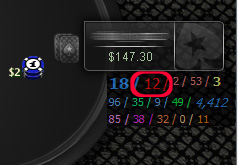 PFR – the percentage of times a player raises pre-flop. This value converges at the same rate as VPIP and becomes useful after about 100 hands.

Tight-aggressive online poker players on 9-max and 6-max tables usually have a PFR percentage between 1/2 and 2/3 of their VPIP, with the tendency of increasing as the tables get shorter. Anything significantly below this range would mean that you are playing too passively and raising only the nuts, while being above it suggests you’re overly aggressive with marginal hands.

Examples using VPIP and PFR.
/For sake of simplicity we’ll assume all opponents have stacks of about 100BB/

No-Limit Holdem, full ring table, you are in late position holding AQo. Everyone folds to a player in middle position who raises 3 times the big blind. You look at his stats (we assume a large enough sample is available).

Obviously a very loose player preflop, but he raises only his strongest hands. So, his current range is AA through 88, AK, AQ, AJs, ATs. Where do we stand?

Loose-aggressive maniac who raises all the time. We are crushing his range, so we’ll definitely play – the only question is, should we re-raise? We have a drawing hand in position against an aggressive player and that’s an incentive to simply call and try to trap. However we probably have the best hand right now so it’s also correct to isolate him by re-raising and not let the blinds in cheaply. When deciding consider the additional traits of the raiser – some maniacs give up in the face of strong opposition and if so, a big re-raise could win the pot outright.

A very tight, aggressive player raises in middle position and you should fold your AQ. Notice that this situation is identical to the first example, even though the VPIPs are starkly different. Many players who use HUDs still make the error of folding to the tight player and calling the one in example A, while thinking ”wow, he’s so loose”. But the villain in the first example actually raised and his VPIP alone is irrelevant!

Be mindful of yourself and learn to see what the poker HUD actually shows you and not what you want the situation to be.