Which poker tracking software is the best?

There are currently only two stable and complete programs for analyzing poker statistics – Hold’em Manager 2 and Poker Tracker 4. Both online poker tools are excellent and very close to each other in terms of features, pricing and support. In addition, their use is allowed on all major poker sites.

I’ve had both of them for a long time and I can tell you the choice is mostly a matter of personal preference. I first started out with PokerTracker Holdem v2 when you still had to buy the Ace HUD separately. Later PokerTracker 3 included the Ace HUD but at that time I preferred to use Hold’em Manager. 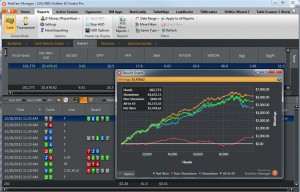 In August 2014 both companies announced a merger, which should allow them to focus on quality and developing new products. However, the two companies still compete against each other and the current (2019) versions are PokerTracker 4 and Hold’em Manager 2. Of the two, PT4 is available for both Windows and Mac platforms, while HM2 is Windows software and you can run it on a Mac only under emulation (but I wouldn’t recommend that, if you are an owner of a Mac, just go with PokerTracker 4). Currently the programs cost exactly the same: $59.99 for the Holdem Small Stakes versions, and $99.99 for all Holdem levels. For those of you who also play Omaha, there are Omaha versions, priced at the same level, and combined Holdem & Omaha packages at $159.99. 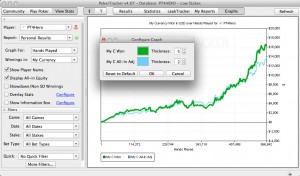 Additional software, which I would recommend, is TableNinja II, which is available for both programs. TableNinja II saves you time when you play on multiple tables by automating tasks like handling the time bank, setting hotkeys, managing wait lists, opening tables and much more.

Another useful tool is TableTracker – it’s the ultimate table selection tool, exclusively available within PokerTracker as an add-on service. The idea is to find the most profitable tables and opponents – there’s no point in playing against the regular grinders, because even if you are better than them, they play tight and the rake would eat your winnings. In order to maximize your win rate, you need to find tables where the players are fast and loose – and TableTracker does the job in a nice and easy way.

After all, which poker tracking software is better?

Both programs are solid and it’s a matter of personal preference which one you will use. Lately I myself use Poker Tracker 4 – very smooth performance and easy to set up. That said, if you are serious about poker, it’s a good idea to try each one for a week or two, and just see which one seems more logical and more organized to you; sooner or later you will pick one and stick to it (because it’s just easier to keep one database up to date instead of two).

In short, don’t worry too much, get the free trial versions and see which one you like 🙂

Download a free trial of PokerTracker 4 and Holdem Manager 2 and
put the odds in your favor!